A note from Charles Schwab this month talking all things trade tension.

“Guard against the impostures of pretended patriotism.”
― George Washington

The phrase “trade war” is front-and-center in the news, but this weekend reminds us of the price thousands of American patriots have paid defending freedom in actual wars. We are thankful that we are free to worry about such things as trade, earnings, and market movements, thanks to the courage and bravery of those who have fought and died to keep us free. We remember and honor them, now and always.

With a tweet from the President, trade tensions jumped back to the forefront of investors’ minds, pushing volatility higher and aiding a long-awaited pullback. Investors have dealt with a back and forth of rising tariffs from both sides of the U.S.-China trade dispute, with the ball currently in the Americans’ court, as the Trump administration is currently studying whether to raise tariffs on the final and largest tranche of Chinese imports. The near-term impact on the market is easy to see, but determining the longer-term economic impact more difficult. That said, multiple recent studies—including by the National Bureau of Economic Research (NBER) and Goldman Sachs—have basically settled the question of who bears the greatest cost of the tariffs … U.S. companies and their consumers do.  At this stage, our friends at Cornerstone Macro estimate a drag on U.S. GDP of -0.30% based on already-imposed tariffs, with a significant 0.4% additional jump expected if the remaining proposed tariffs on $325 billion of Chinese imports are imposed.

Those estimates are largely based on the direct impact of Americans paying higher prices (a “tax”) due to the tariffs. We are also concerned about the hit to corporate confidence and the attendant halting of forward capital spending plans. The consumer-led growth part of the economic cycle is already rolling over; and the hoped-for next leg of capital spending growth is being dashed.  For now, despite a modest pullback, business confidence remains fairly high (especially among smaller companies); but most measures haven’t taken the latest rise in trade tensions into account. Already, we’ve seen the ISM Manufacturing Index indicate that manufacturing executives are growing more concerned about the trade uncertainty; with the key leading indicator of new orders in decline. We’ll be watching confidence, and capital spending plans, closely as the trade tensions drag on. 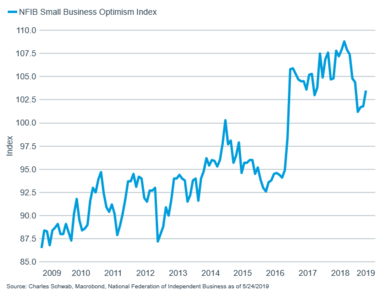 What is uncertain at this stage is the more dominant trait of President Trump: retaining his self-proclaimed “tariff man” status at any cost, or the desire for a second term as President? The latter would suggest a lofty incentive to reach a deal; however, there are two sides in this battle, and China is making it increasingly clear they are playing a long game and won’t be “bullied” (their word) into a deal. In the meantime, it’s our job to try to assess the economic and market implications of the tariffs to date, without trying to game or forecast an unknowable outcome.
The trade news is not all bad. Earlier this month, the Trump administration announced it was delaying a decision on auto and auto parts tariffs, which would have had added the European Union and Japan to the trade battle. Also, according to our own team in Washington, the formerly-NAFTA/currently-USMCA trade agreement among the United States, Canada and Mexico is at least slightly more likely to be ratified by Congress courtesy of the decision to remove tariffs on steel and aluminum aimed at Canada and Mexico.  (For more on trade tensions see Liz Ann’s Street Fightin’ Man: President Trump Ups Trade War Ante article).

Economic data on the back burner, but should not be ignored

With trade taking up much of the oxygen in the room, recent economic data may have been overlooked by many investors. There were some recent releases that added to our concerns about the near-term trajectory of economic growth. First quarter real gross domestic product growth (GDP) was stronger than expected, but boosted significantly by inventories and net trade; both of which are expected to reverse in the second quarter. Since that release, we got the April readings on industrial production and retail sales; which were both big misses, at -0.5% and -0.2% month/month, respectively (see charts below). In addition, according to the Federal Reserve capacity utilization dipped again, moving from 78.5% to 77.9%. 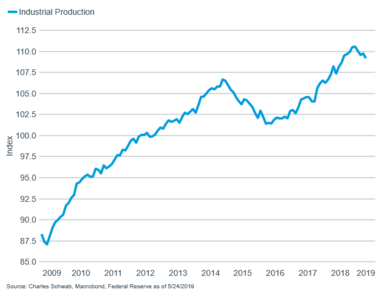 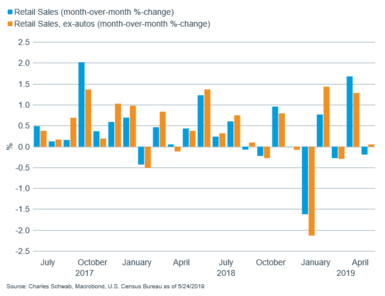 There has been positive news as well, with initial jobless claims turning back down after a couple of weeks of higher readings; and regional surveys such as the Empire Manufacturing Index and the Philly Fed Index both posted gains in the latest readings.

Although the data has been a mixed bag, and it’s still early, two well-watched forecasts of GDP—the Atlanta Fed’s GDPNow and the New York Fed’s Nowcast—are sporting 1-handles on expected real GDP growth for the second quarter. The New York Fed also runs a recession probability model based largely off the yield curve, and it is approaching 30%. Although there were exceptions in the late-1960s and late-1990s, a level this high has been a consistent warning of a coming recession.

In the midst of all of this the Federal Reserve remains in pause mode; after becoming significantly more dovish since the January Federal Open Market Committee (FOMC) meeting. However, there remains a yawning gap between the market’s expectation of a 90% likelihood of a rate cut by year end and the Fed’s official forecasts, which suggest the next move will be another hike.  We believe economic data would have to deteriorate much more for a rate cut to come to pass near-term—and as usual, the convergence between the market and the Fed could contribute to volatility in the coming months.

Shelters from the Storm?

In general, the markets seem to subscribe to the notion that there are no winners in a trade battle. By staying out of the fight, a country or region may be able to avoid collateral damage. U.S. and Chinese companies may bear the brunt of the costs of their ongoing trade battle. Already, China’s better-than-expected economic data reported in April (surprise index above zero in the chart below) was short lived, as we had expected. In Europe and Japan there has not yet been a direct hit from the U.S.-China tariff and non-tariff barriers. Even when accounting for a potential tightening of financial conditions, the impact of the U.S.-China tariffs may be negligible on European or Japanese economies and companies.

Japan’s economy and companies may feel relatively little impact from the escalating U.S.-China trade tensions, due to several factors: 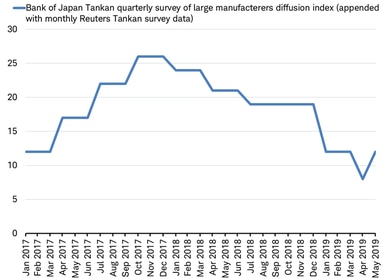 The growth outlook for European economies and companies may also be relatively insulated from fallout from the U.S.-China trade salvos, due to a few factors: 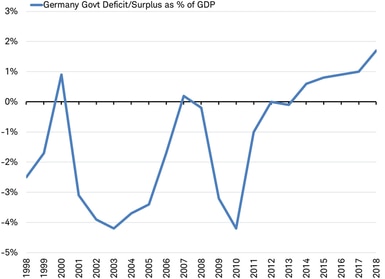 Of course, the U.S. delay on auto tariffs could end up being only temporary and drag Europe and Japan into the fray. These concerns may have resulted in stocks in the MSCI EAFE Index, dominated by stocks from Europe (63% of market capitalization of the EAFE Index) and Japan (24% of market capitalization of the EAFE index), having pulled back a similar amount as U.S. stocks since the trade tensions were renewed, as you can see in the chart below. However, they didn’t fall anywhere near as far as Chinese stocks, measured by the MSCI China Index. 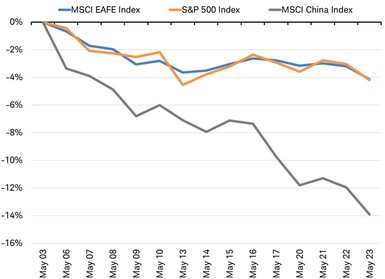 Source: Charles Schwab, Bloomberg data as of 5/22/2019.  Past performance is no guarantee of future results.

Clearly, markets aren’t too stormy yet (except in China) and U.S. and EAFE equity market performance has been very similar since trade tensions escalated. But the U.S.-China trade tempest may not subside anytime soon and investors may continue to look for shelter from the rising storm. There are reasons unrelated to trade that stocks based in Europe and Japan may suffer. However, staying as far as possible from the successive waves of trade barriers might offer a relative growth advantage for companies based in EAFE countries, and support the forecast by the consensus of Wall Street analysts for slightly stronger earnings growth for companies in the MSCI EAFE index than in either the United States or China in 2019.

Trade tensions will likely continue to contribute to increase volatility and the  longer it drags on, the bigger hit to economic growth, consumer/business confidence and the stock market. Our neutral stance around U.S. equities suggests keeping allocations no higher than longer-term strategic targets, with a large cap bias; using volatility for rebalancing opportunities. For those investors who don’t have broad international exposure, now may be a good time to consider areas that may feel less impact from the U.S.-China trade dispute.