Rising prices and slowing demand have cast shadows on this year’s economic outlook, especially as the Federal Reserve begins tightening monetary policy. Whether the situation will lead to a recession remains to be seen. Globally, there are signs that stretched supply chains are beginning to ease, potentially slowing the pace of inflation—which would be welcome news for investors and central bankers.

The U.S. economy is looking increasingly at risk of a slowdown. Persistently high inflation, the unknown impact of higher commodity and energy prices as a result of the Russia-Ukraine war, and indications that demand is softening have raised concerns about future economic growth. Meanwhile, the Federal Reserve has begun tightening monetary policy in an effort to control inflation—more on that below—which adds to the pressure. Whether this combination is enough to slow the economy markedly (perhaps into recession), remains to be seen.

For now, though, the mix of higher prices and slower demand suggests an economy that is under pressure from “countercyclical inflation”—that is, when prices rise fast enough to slow economic growth. Higher prices’ toll on demand can be seen in the Institute for Supply Management’s (ISM) March manufacturing and services surveys. As you can see in the chart below, the new-orders component of both indices (a proxy for demand) have failed to keep up with the prices component (a proxy for inflation). This has pushed the spread to levels consistent with the recession that began in 2007. 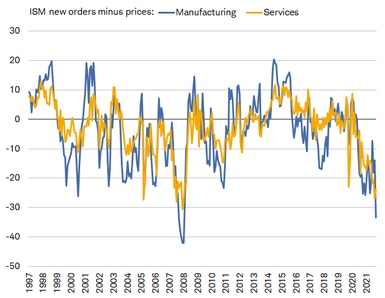 While a deeply negative spread doesn’t necessarily suggest a severe slowdown is imminent, the unfortunate reality in the current environment is that demand isn’t poised to pick up markedly. Even if prices start to decline as inflation cools, that could simply mean companies are drawing down their inventories and cutting prices as demand drops (thus hurting profit margins).

A slowing growth rate is consistent with where we are in the monetary policy cycle. As the Federal Reserve has started to raise short-term interest rates—and to emphasize its commitment to reining in inflation’s fastest rise in decades—financial conditions have begun to tighten. As you can see in the chart below, conditions aren’t tight in absolute terms, but they’ve moved off their lows. The shift to a relatively tighter environment has historically been consistent with coming weakness in profit margins. Thus, while a reduction in price pressures may look good on the surface, it may coincide with anemic economic growth. 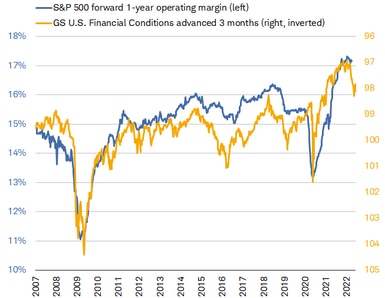 Source: Charles Schwab, Bloomberg, as of 4/9/2022. A move up in the Goldman Sachs (GS) U.S. Financial Conditions Index indicates that financial conditions are tightening; a move down indicates conditions are easing. Note: Historically, advancing the GS U.S. Financial Conditions Index by 3 months can illustrate whether there is a correlation with the S&P 500 forward 1-year operating margin.

In addition to margins, the stock market’s valuations tend to come under pressure when financial conditions tighten. The most recent decline in the S&P 500’s forward price-to-earnings (P/E) ratio, shown in the chart below, has mostly been due to the significant improvement in forward earnings estimates during the economy’s rebound from the COVID-induced recession. Yet, as stocks have struggled this year, the numerator (P in P/E) has contributed to some of the decline.

While that may make the market look more attractive today, the Fed model—also shown in the chart as the spread between the S&P 500’s forward earnings yield (the inverse of the P/E ratio) and the 10-year Treasury yield—is starting to suggest that stocks are getting increasingly expensive. To be sure, it isn’t close to levels during prior market peaks, but the spread has fallen to the lowest since 2009. 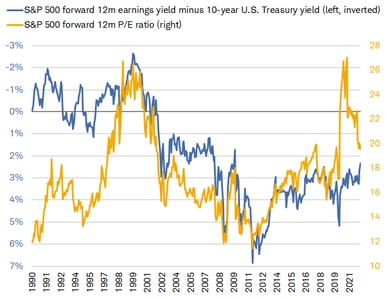 Source: Charles Schwab, Bloomberg, as of 4/11/2022. A smaller spread between the S&P 500’s forward earnings yield and the 10-year U.S. Treasury yield indicates stocks look less attractive relative to bonds. Hence, a move up in both series in the chart indicates that stocks are looking increasingly expensive altogether.

As is always the case, valuation is as much a sentiment indicator—or rather, an indicator of sentiment—as it is a fundamental metric. As such, we don’t encourage investors use it as a market-timing tool, evidenced by the (just-shown) dual messages it can sometimes send.

The next phase of the Federal Reserve’s tightening is set to begin. The minutes from the March Federal Open Market Committee (FOMC) indicated that quantitative tightening (QT)—the process of reducing the amount of bond holdings on the Fed’s balance sheet—will likely start soon. This is one more tool in the Fed’s toolkit as it tries to pull down inflation.

The Fed’s goal is to tighten monetary policy by reducing liquidity flowing to the financial system. That makes money more expensive to borrow and less widely available. It turns the tide in liquidity. In theory, when combined with Fed rate hikes, it should send bond yields up across the curve.

The Fed plans to initiate QT by allowing maturing bonds to actually roll off the balance sheet. Currently, all maturing bonds are reinvested. While the process will likely ramp up over the course of a few months, the goal is to ultimately allow $95 billion in securities to “mature off” the balance sheet each month, comprised of $60 billion in Treasuries and $35 billion in mortgage-backed securities (MBS). There likely won’t be any outright security sales at first, although the Fed may decide to sell some MBS to more quickly achieve a “Treasuries only” balance sheet. 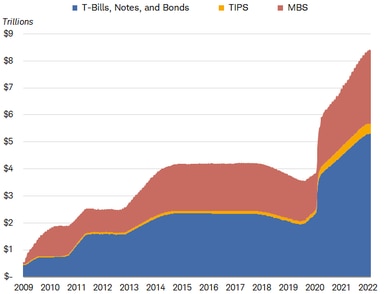 Any balance sheet plans are unlikely to get in the way of Fed rate hikes over the course of the next FOMC meetings. Markets are pricing in multiple 50-basis-point rate hikes through the end of the year, with the federal funds futures market pricing in a 2.5% rate by year end. Fed officials have been increasingly vocal about the need to tighten aggressively, which has sent Treasury yields even higher.

The yield curve has flattened 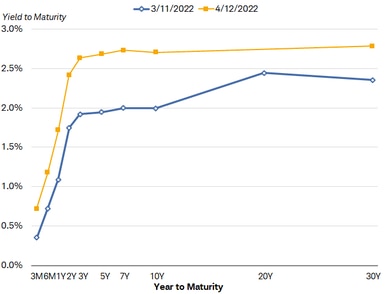 While QT should boost yields in theory, the last iteration had mixed results. We only have one previous period of QT to consider—from October 2017 through August 2019. The Fed began to hike rates in December 2015, boosting its target from the zero- to-0.25% range to the 1%-to-1.25% range by mid-2017, only to pause for a few months once the quantitative tightening process was initiated.

What caused yields to drop in the middle of QT? The economy was slowing in response to Fed tightening, inflation was falling, and the financial system was getting clogged up because there weren’t enough reserves in the system to make it function properly.

The market likely viewed policy as “too tight” since the fed funds rate rose above “neutral rate.” The neutral rate is the level that allows the economy to grow at its potential without generating inflation. Monetary policy shifted from accommodative to neutral to restrictive.

Monetary policy doesn’t seem too restrictive just yet, despite the relatively flat slope of the yield curve. Yields on Treasury maturities from two through 30 years are converging in the 2.5%-to-2.75% area. While that flat spread has raised some recession alarm bells, the gap between very short-term yields and long-term yields, remains steep. This signals that the Fed still has ample room to raise rates.

The Fed and other major central banks are well into this tightening cycle, even though there have only been modest rate hikes to date. Quantitative tightening is the second phase for central banks hoping to normalize policy. With global liquidity already declining, QT will likely have a negative impact on risk assets that relied on zero interest rates and abundant quantities of easy financing.

Although the financial system should be less fragile than last time around, with the Fed committed to keeping more reserves in the system, the economic and market impact could play out as it did in the last round of QT. We would expect long-term yields to peak over the next few months as policy becomes restrictive and risk assets to see heightened volatility.

Global stock prices have rebounded to pre-war levels, but remain lower than where they started the year amid concerns about inflation. The ongoing rise in prices has been driven by the inability of supply to keep up with demand. If stretched supply chains begin to ease, the potential for a slowdown in the pace of inflation may be welcome news for investors and central bankers.

It seems that supply chain conditions may be moving in this direction. For the past several months manufacturers have been indicating that the time it takes for suppliers to deliver orders has been shortening and that order backlogs are being filled, as seen in the chart below.

Source: Charles Schwab, FactSet, as of 4/8/2022. The backlogs of work index from IHS Markit’s PMI business surveys captures the volume of orders that a company has received but has yet to either start work on or complete. The suppliers’ delivery times index captures the extent of supply chain delays in an economy, which acts as a barometer of capacity constraints.

This data shows improvement; however, the complexity of logistics means that some factors may improve while others deteriorate. It’s important to assess many different measures of supply-chain efficiency in determining the potential direction of inflation. These include measures of timing, volume, price and inventory as well as external factors, like China’s COVID cases, which can create logjams through government lockdowns. Our monthly supply chain dashboard below is color coded: redder shading indicates worsening supply chain pressures and greener reflects improvement. Overall, not much changed in March, but the China indicators worsened due to the COVID outbreak and government response.

Are the worst of supply chain shortages behind us?