A note from Jeffrey Kleintotop, CFA, Senior Vice President, Chief Global Investment Strategist.  Jeff specializes in analyzing international market trends and their financial implications. He’s frequently cited in a range of national media outlets including The Wall Street Journal and The New York Times. He has an MBA from Pennsylvania State University.

In our 2018 global outlook, our top takeaway was “the increasing risk of a recession and bear market beyond 2018 make portfolio rebalancing important.”  This continues to be an important action for investors to consider mid-way through the year as trade risks mount and growth momentum slows.

Broad global economic and earnings growth continues, but momentum is slowing. How the ongoing trade conflict plays out will likely be the main risk markets focus on in the second half of the year. The global stock market, measured by the MSCI AC World Index, is close to where it started the year and data from the Investment Company Institute shows that investors have been net buyers of stocks even as the trade disputes escalated in the second quarter. This suggests that investors have been seeing the tariffs implemented so far as relatively small, tame and unlikely to end growth. The danger is that these steps could escalate further into bigger and substantially more damaging moves in the coming months, developing into a much scarier prospect staring back at investors. 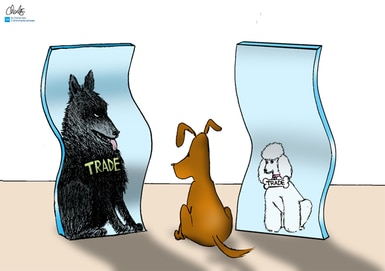 Barring a major escalating trade conflict, economic growth may stabilize in the second half of the year after slowing in the first half from an unsustainably fast pace in Europe and Japan. At the end of 2017 the year-over-year pace of GDP growth in Eurozone was 2.8% (outpacing 2.6% in the U.S.) and 1.9% in Japan. These rates appear to be easing to a more sustainable pace of around 2% in Europe and 1% in Japan. The slower, but solid, pace of growth may encourage European monetary policymakers to take a slow approach to ending stimulus this year.

The global composite Purchasing Managers Index (PMI) is a widely-watched and timely economic indicator incorporating over 30 countries that amount to 85% of global GDP. The global PMI slid in February and March, but then stabilized in April and May. As you can see in the chart below, global stock market performance (in orange) and the global composite PMI (in blue) have generally been in sync. The orange and blue lines now appear to be reconnecting, as they have already done three times this cycle when the “sugar high” that lifted stocks during the Federal Reserve’s Quantitative Easing (QE) monetary stimulus programs came to an end. The most recent disconnect reflected rising optimism over fiscal stimulus. That “sugar high” is now fading after the enactment of the tax cuts in January. As of mid-year, stocks no longer appear to be widely disconnected from economic fundamentals. This suggests to us that while volatility is likely to persist, the economic environment indicated by the PMI supports the potential for single-digit stock market gains in the second half of the year, not a bear market. 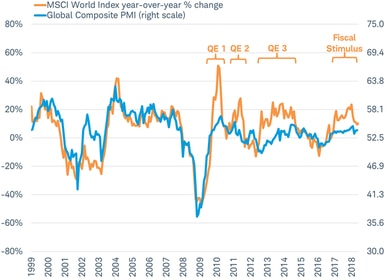 Source: Charles Schwab. Bloomberg data as of 6/22/2018.  Past Performance is no guarantee of future results.

International stocks (including emerging markets) have typically outperformed U.S. stocks in the later stages of the economic cycle. That has been the case in five of the six global economic cycles of the past 50 years, and in all of the past three cycles for the shorter index history of emerging market stocks. However, risks to trade and a drag from a rising dollar have negatively impacted international stock market performance this year. While trade will remain a key driver, we believe that moves in the dollar are largely constrained by opposing forces tied to monetary and fiscal policy.

In the past, long-term trends have often reversed in the later stages of the economic cycle. This makes rebalancing portfolios—trimming leaders and adding to laggards, and restoring the portfolio’s long-term strategic asset allocation particularly important this year. Three long-term trends that may reverse in coming years include the relative performance of: U.S. and international stocks, growth and value stocks, and small and large cap stocks.

There are no guarantees in life, but historically there have been regularly occurring cycles of performance. As you can see in the chart below, after 10 years of U.S. stock market outperformance of international stocks, the trend again may be about to reverse due in part to the stage of the global economic cycle, the gap in valuations, and how wide the trend in relative performance has become. 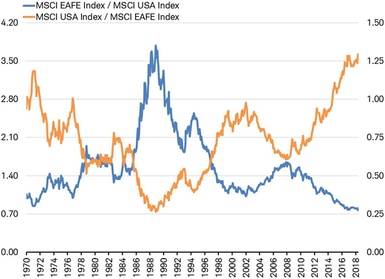 We can see a similar cycle of performance between growth and value stocks in the chart below. This one may not be at an extreme yet; the trend may still have some more time to run, but it’s worth watching. Growth outperformed in the late 1990s (led by the technology sector), then value from 2000 to 2007 (led by the financials sector), then a return to growth leadership (again led by technology). We still like technology stocks, but we also like financials. It may not be a bad idea to rebalance by style. 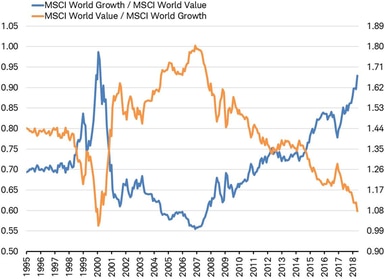 The chart below shows the trend between large and small cap capitalization stocks. Small caps have been outperforming large caps since the bull market began in 2009. The trend may be stretched, given the gap in valuations and the tighter credit conditions that are often associated with the later stages of the economic cycle. 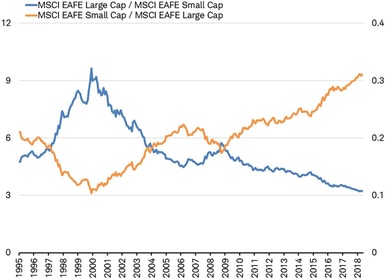 Prepared investors should be thinking about being a contrarian and rebalancing their portfolios back towards a balance in geography, style, and size after many years and the later stages of the economic cycle that have pushed trends to historical extremes.