It took a little longer than usual perhaps, but once earnings reporting season was in the rear view mirror, the summer doldrums set in, before being jolted by geopolitical concerns (see below). U.S. equity indexes drifted higher, approaching record high territory in very quiet fashion, as volatility recently dipped to near the lowest levels of the year. But the recent (short-lived) pullback in stocks and uptick in volatility could be harbinger of things to come. 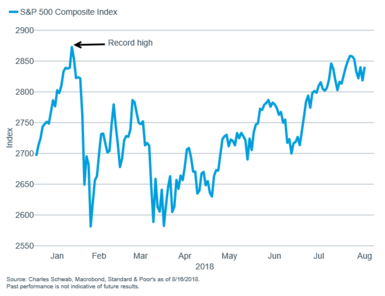 …as volatility bounced off of extremely low levels 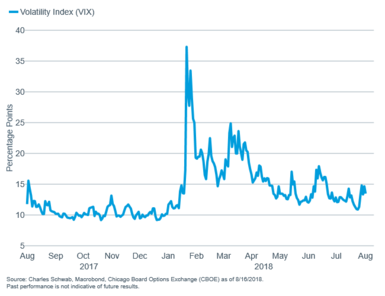 Risks appear to be rising

We never want to put too much into a few days of trading, up or down, but we also don’t want investors to get lulled into a false sense of security.  There are some developments bubbling a bit below the surface which have raised our concern about risks to the stock market.  Remember, as the “Great One’s” quote illustrates above, it’s important to look where things might be headed, not where they are right now. The stock market is a forward-looking indicator. As we often say, when it comes to connecting the dots between the economic/earnings fundamentals and the stock market, “better or worse tends to matter more than good or bad.” We’re concerned that some economic indicators are showing signals of “second derivative” (rate of change) inflection points; even if many of them remain healthy in terms of their levels.  In terms of the stock market, over the past three months, the defensive sectors of health care, utilities, telecom and consumer staples have outperformed according to the S&P 500 sector breakdown, indicating some growing caution among investors. We believe it’s prudent for investors to review the risk profile of their portfolios and make sure they’re not above the comfort zone. In fact, for the more tactical investors among you, we have reduced the risk profile of our sector recommendations by downgrading our view of the technology and financial sectors to neutral, while upgrading our recommendation to the utilities and real estate sector, also to neutral (read more at Sector Views ). 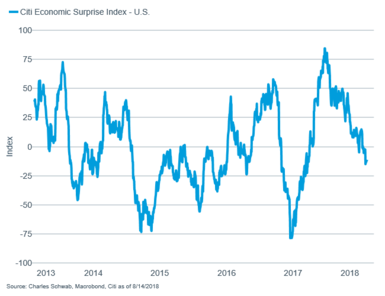 Few investors would argue against the notion that the massive quantitative easing (QE) coming out of the financial crisis helped to fuel stock gains. We are now in an era of quantitative tightening (QT)—through both balance sheet reduction, but also interest rate increases—and it’s naïve to assume the move toward monetary policy normalization won’t bring some significant jolts to market performance. 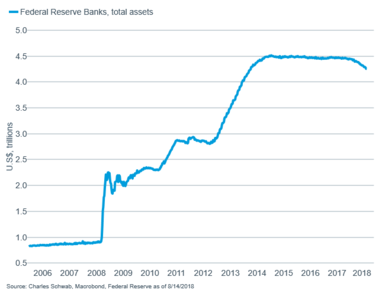 Monetary policy tightening is occurring at a time when trade uncertainty is elevated. Some hopeful signs have come out of Europe and Mexico, but the rhetoric with China remains intense, with the United States threatening additional tariffs on $400 billion worth of Chinese imports and the Chinese responding by saying they will match any escalation in the trade “war.” The actual economic impact of these tariffs, even if they were to all go into effect, is large on certain areas of the economy that shouldn’t be ignored; but likely relatively small on the overall U.S. economy. However, it’s the uncertainty that could lead companies to hold back on investments and hiring. In fact, 49% of respondents in the Institute of Supply Management (ISM) manufacturing survey indicated concern about trade and tariffs. Delays of spending on capital improvements would have implications for economic activity and productivity, both of which have picked up lately.

For now, we are coming off what was a very strong earnings season, with a beat rate of 79% on earnings and 72% on revenues according to Thomson Reuters, well above the historical average beat rates of 64% and 60%, respectively.  Additionally, analyst estimates for the coming quarters are ramping up. We have some concern that companies’ ability to best these elevated expectations may be diminished; and while earnings will likely continue to be good, they may be a little “less good.”

The bear is likely to stay in hibernation…for now

Risks are growing, but we don’t believe a bear market is around the corner. Barring a black swan-type shock, we believe the next bear market will come when it begins sniffing out the next recession, which we don’t see in the near-term. Economic growth remains healthy, although possibly at or near its peak in growth rate terms; while inflation has been accelerating. Tax cuts are still having a positive impact on consumers and businesses; and the Treasury just issued final guidelines on repatriation, so we should start to see even more corporate money coming back to the United States from overseas. Both should help the U.S. economy weather the ongoing trade uncertainty as well as tighter monetary policy, but higher inflation is taking a bite out of nominal data, like wage growth (“real” wage growth has dipped into negative territory).. So far, the impact has been minimal on the employment data, with the leading indicator of jobless claims remaining at multi-decade lows. The tight labor market has aided the increase in most inflation indexes; possibly pushing the Fed to be more aggressive in their rate hiking campaign. All three closely-watched “core” inflation indexes—Consumer Price Index (CPI), Personal Consumption Expenditures (PCE) and Underlying Inflation Gauge (UIG)—are near or above the Fed’s 2% target. In addition, notice how the UIG has tended to lead the other two measures, which suggests upward pressure on inflation will persist. Although the stock market has priced in two more rate hikes this year, a faster-than-expected pace in 2019 could lead to elevated volatility, especially if we enter a phase of weakening economic growth and accelerating inflation.

Inflationary pressures are on the rise

Investors may not be prepared for higher inflation, which would could put further downward pressure on real economic and wage growth. For now, we think the secular bull market remains intact, but are reinforcing that investors should tactically keep equity allocations no higher than neutral relative to long-term strategic allocations.

In addition to the issues bubbling up domestically, Turkey—which makes up less than 1% of the MSCI Emerging Markets Index and less than 0.1% of the stocks in the MSCI AC World Index—has been having a much larger impact on the overall world stock markets. Let’s examine the likelihood of a crisis in Turkey and how a potential crisis in Turkey may affect the rest of the world.

How likely is a crisis in Turkey?

Pretty likely, in our opinion. The latest worsening in Turkey’s troubles came after the erosion of confidence in the independence of the central bank; and after President Trump announced a doubling of steel and aluminum tariffs on Turkey in retaliation for Turkey’s holding of Evangelical Christian pastor Andrew Brunson on terrorism charges tied to a coup attempt. But the crisis is a long time coming. Arguably, we believe fiscal and monetary policy has been too easy in Turkey, and therefore growth has been far too strong. With Turkey’s gross domestic product (GDP) coming in at 7% last year, imbalances have built up, such as a large current account deficit and debt as a percentage of GDP. Turkey ranks among the worst emerging market economies on these measures, as you can see in the chart below. In addition, Turkey has had 19 International Monetary Fund (IMF) arrangements, or “bailouts,” since 1960, per IMF records; so it isn’t exactly a surprise that the country finds itself in trouble again. In fact, Turkey has been referred to as one of (and arguably the worst of) the so-called “fragile five” economies for half a decade. “Fragile Five” is a term coined by Morgan Stanley in August 2013 to refer to a handful of emerging market economies (Turkey, Russia, Brazil, India, Indonesia) that had become too dependent on unreliable foreign investment to finance their growth. Turkey is the most fragile of these five, as reflected in the chart below of the rising cost this year to insure its debt against default over the next five years.

Turkey’s divergence from the “fragile five” 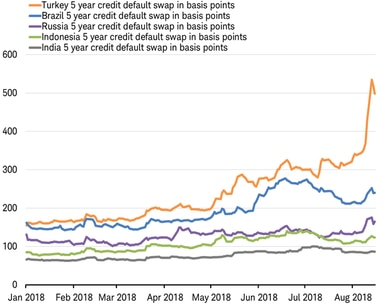 Annual cost to insure against default over the next five years in basis points.
Source: Charles Schwab, Bloomberg data as of 8/15/2018.

Turkey is small, but there are three key ways a crisis can spill over from a country into the broader region: financial, trade, and geopolitics. Let’s look at each of these.

Financial – Turkey’s growth has led to a buildup of dependence on foreign lending, resulting in a potential risk of financial contagion to the European region. Eurozone banks’ exposure to Turkish debt is only about 1% of total assets, but some European banks with operations in Turkey have greater exposure, per Bank of International Settlements data. Fortunately, this is relatively small. More importantly, Eurozone banks are much better capitalized to withstand shocks than they were in the 2008-2009 global financial crisis, or even 2011’s European debt crisis, with more than double the required minimum capital against losses (measured by Eurozone banks’ Tier 1 capital ratios as shown in the chart below).

There does not appear to be a financial contagion developing in Europe, per the financial conditions index for the Eurozone. As we can see in the chart below, there is nothing like the deterioration of financial conditions seen in 2011’s European debt crisis much less the 2008-09 financial crisis—at least so far, but we will be watching it closely since conditions can change quickly.

Trade – While Turkey is dependent upon exports to the Eurozone (at 35% of all exports), that dependency does not go both ways. Turkey is well down the list of trading partners with the Eurozone, making up only a small percentage of total Eurozone exports (1%) and imports (1%). Furthermore, there are no critical exports from Turkey on which Europe is dependent. So there is little risk of spillover from the turmoil in Turkey tied to trade. 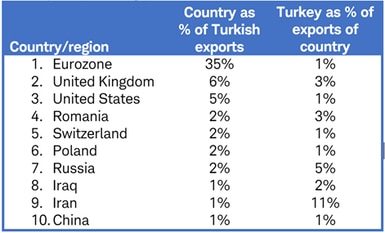 Geopolitics – In addition to assessing financial and economic spillovers from the crisis in Turkey, geopolitics must be considered. The combination of economic stress in Turkey, deteriorating relations between Turkey and leaders in Europe and the United States, and a final push by loyalist forces into the last rebel held strongholds in neighboring Syria, could result in a fresh migration shock to Europe. Since 2016, migration flows into Europe have fallen sharply, largely thanks to an agreement between Turkey and the EU under which Turkey retains refugees in return for EU funding that has led Turkey host to around 3.5 million Syrian refugees. 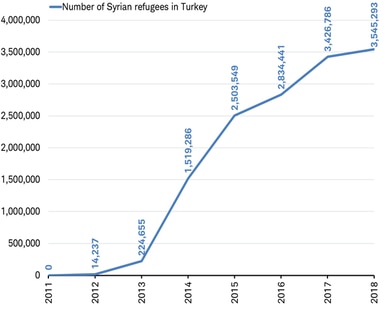 Source: Republic of Turkey Directorate General of Migration Management as of 8/15/2018.

To put these numbers in context, Europe has taken in a total of about one million Syrian refugees, with half of them going to Germany, according to the United Nations High Commissioner for Refugees (UNHCR). This has triggered a populist backlash and gives a greater voice to populist parties in the governments of European nations. A new and potentially even bigger wave of migration into Europe caused by a deepening Turkey crisis would likely intensify political divisions in Europe and make it harder to manage the challenge of populism to implement necessary reforms. The risk is complicated by a potential lack of U.S. support for another IMF bailout of Turkey, if needed.

Turkey’s troubles may linger and even worsen, but the spillover to the European region or the world seems limited. Nevertheless, financial conditions and geopolitical developments bear watching.

The recent pickup in market volatility, some choppy action by U.S. stocks, and notable weakness in emerging market stocks have reinforced our belief that we may be at or near an inflection point in economic fundamentals and/or market character. We never suggest trying to time the market in the short-term, but do believe discipline around strategies like rebalancing and diversification is essential at this stage in the cycle. Risks are rising.