The year is in its waning days and barring a bombshell in the last couple of weeks, 2017 will go down as one of the most remarkable on records. Few investors expected the S&P 500 to post gains of close to 20% with near-record low volatility while enduring geopolitical tensions, massive natural disasters, political infighting in Washington, and a tighter monetary policy.  This year has demonstrated why it can be detrimental under-exposed investors to wait for a pullback. As of this writing, we are in the longest period in S&P 500 history without a 3%+ correction, with no move of that size since November 4, 2016. Another mark of the steadiness of the market in 2017 has been the attention the small pullback we’ve seen lately has gotten—with some media pundits asking whether this marks the beginning of the end. We remain in the no camp, and believe that any pullback or correction would be a healthy development in the context of an ongoing secular bull market. 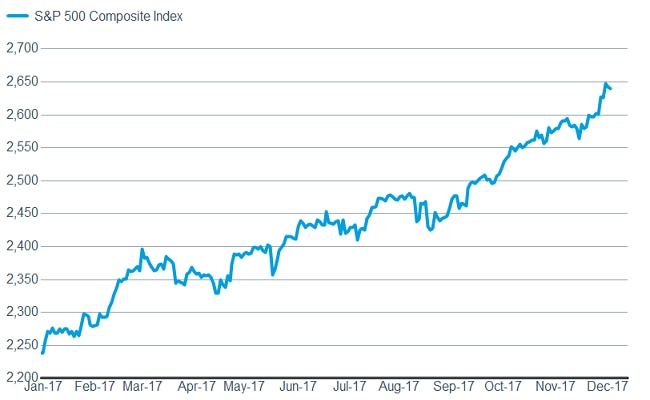 Source: FactSet, Standard & Poor’s. As of Dec. 5, 2017.  Past performance is no guarantee of future results.

But while we think the bull market still has room to run and investors should remain at their long-term strategic equity allocations, it can be easy to get complacent after a year like this.

We believe the typical Wall Street exercise of publishing year-end stock market targets is of little value to Main Street investors, so we don’t dive into that pool. But we do believe that the secular bull market is intact as we conclude this year, but we expect a bumpier ride in 2018.

The U.S. economy has picked up steam; with back-to-back quarters of 3%+ growth and the Atlanta Fed’s GDPNow showing an estimated 3.2% growth in the current quarter. Additionally, the employment picture is healthy, with claims near record lows, unemployment at 4.1% and solid 228,000 jobs being added in November, according to the Department of Labor. Further, business and consumer confidence is booming, both the manufacturing and services Institute for Supply Management’s indexes show robust growth, and the Index of Leading Economic Indicators continues to rise. Housing is also picking up again, with housing starts rising nearly 14% last month (Census Bureau), and existing housing inventory is down over 10% year-over year (National Association of Realtors). 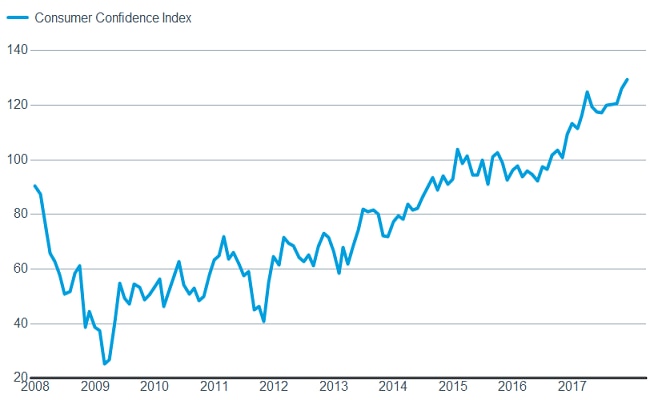 And the LEI is indicating continued growth 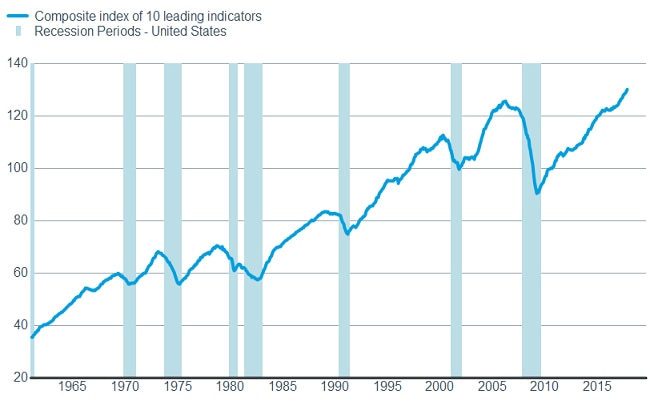 But there’s a rub to all the good news. Expectations are becoming elevated and could morph into a bar set too high for actual data to hurdle in 2018. As it is, the Citigroup U.S. Economic Surprise Index is at a level that has historically led to some mean-reversion. We’ve often said it’s both inflection points and relative growth that generally matter more than positive or negative growth in an absolute sense.

In terms of corporate earnings growth, Thomson Reuters’ 2018 S&P 500 consensus earnings forecast is above 11%. Although a boost from tax reform is potentially in the cards, elevated valuations suggest that any disappointment relative to those expectations could bring heightened volatility and/or pullback risk.

Tax reform is moving along, and odds are improved that it will cross the finish line; the final form is still in question, as is the ultimate impact on the economy. Judging by market movements on tax news, investors are optimistic about passage; while hopes for an infrastructure package seem to be falling as midterm election season heats up early next year. Finally, there is the Robert Mueller investigation wild card, which could also wreak havoc with investor sentiment. .

There doesn’t appear to be any waning in the desire by the Federal Reserve to continue normalizing policy, as evidenced by the near-certainty (according to the fed funds futures market) of a rate hike in December.  However, with Jerome Powell taking over the Fed chair position in 2018, and several new members set to be appointed, uncertainty is elevated. Judging by the comments from Powell during his confirmation hearings, continuity and transparency are priorities; but if inflation should flare up, or growth start to lag, the Fed may be challenged early in the new regime.

Seeing some red in the year ahead

The positive market vibe wasn’t limited to the United States in 2017. It has also been an impressive year for global stock markets. In fact, a gain for December would make 2017 the first year ever with global stocks up during every month, as you can see in the table below.

December don’t let us down 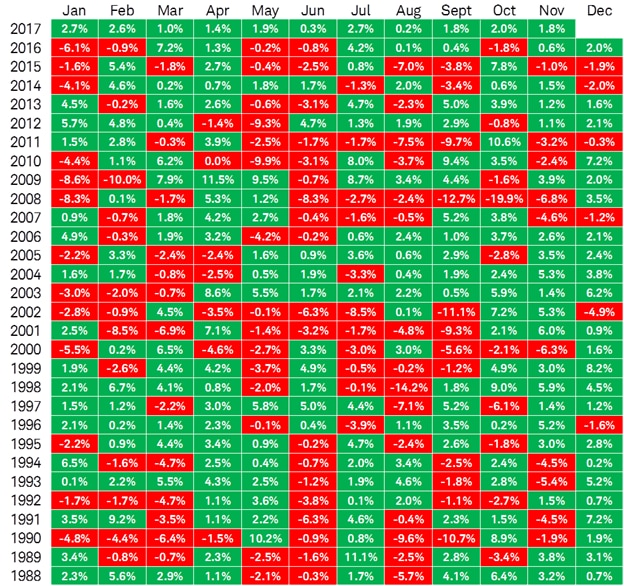 Table displays monthly change in MSCI AC World Index since inception of index.
Source: Charles Schwab, Factset data as of 12/1/2017.  Past performance is no guarantee of future results.

After a year with uninterrupted monthly gains, it seems safe to say that 2018 may bring more volatility in global stocks. We may see some red next year, but like the U.S. market it appears to us that a steep bear market is unlikely. The consistent gains of 2017 were supported by an equally-consistent monthly rise in both actual and estimated earnings for companies in the MSCI All Country World Index, as you can see in the chart below. In 2018, global stocks may again be driven primarily by earnings growth fueled by back-to-back years of growth in all of the world’s 45 largest economies tracked by the Organization for Economic Cooperation and Development OECD—making up more than 90% of global gross domestic product (GDP)—for the first time in a decade. 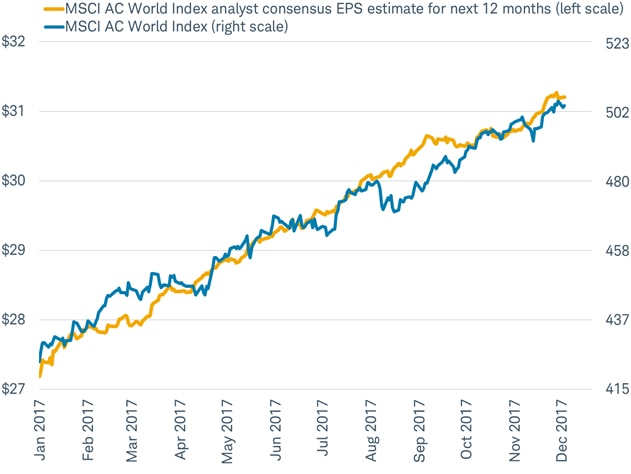 Source: Charles Schwab, Factset data as of 12/5/2017. Past performance does not guarantee future results.

In 2018, global central banks are likely to gradually curtail easy monetary policies, but financial conditions are not likely to worsen sharply. Financial conditions remain easy-to-stable, despite interest rate hikes by the Fed and tapering by the Bank of Japan and the European Central Bank, as you can see in the chart below. A sharp deterioration in financial conditions similar to what contributed to the global bear markets of 2008 and 2011 seems unlikely, but even a modest pace of tightening could lead to conditions beginning to worsen in 2019 or beyond.

Financial conditions have been favorable 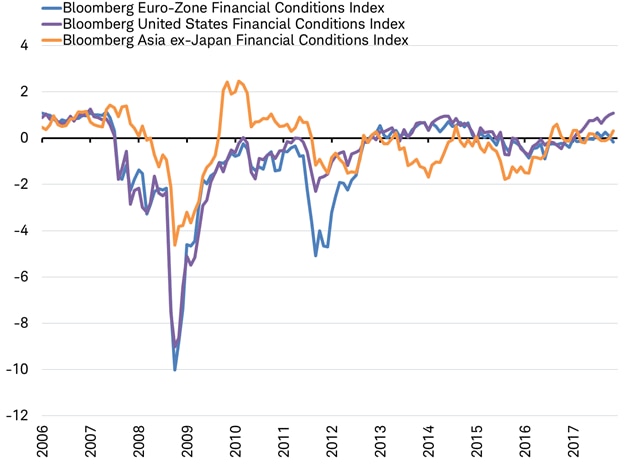 Our near-term outlook for global stocks in 2018 is positive. We believe most markets are not too expensive to post further gains in the later stage of the economic cycle (for more insight on valuations see: Are Stocks Too Expensive?), as long as earnings continue to rise with economic growth next year. But in the intermediate-term (including the years 2019-2021) we see a heightened risk for portions of the global economy to experience recessions and bear markets. The past three global recessions were all caused by the bursting of bubbles: the housing bust led to the financial crisis of 2008-09; the collapse of dotcom stocks triggered the early 2000s recession; and the widespread bank failures of the Savings and Loan crisis and collapse of the Soviet Union preceeded the early 1990s recession. But, unlike the last few recessions, the next one may end up being more like those of 1960s, 1970s, and 1980s, when overheated and extended business cycles came to an end as central banks responded to concerns over inflation pressures by tightening monetary policy.

According to analysis by the Schwab Center for Financial Research, in the later stage of the economic cycle, international stocks have historically outperformed U.S. stocks due to their enhanced cyclicality and inflation sensitivity (since the inception of the MSCI EAFE index in 1969). Despite the favorable near-term environment, we believe investors should keep international stocks at their long-term targets due to the elevated likelihood of an intermediate-term recession and bear market.

Investors are cautioned not to extrapolate 2017’s performance into 2018, and we expect more frequent bouts of volatility. The global bull market is intact, supported by solid global growth and strong corporate earnings. But with the expectations bar now set quite high heading into next year, pullbacks are increasingly possible. Discipline is important looking ahead.

International investments are subject to additional risks such as currency fluctuations, political instability and the potential for illiquid markets. Investing in emerging markets can accentuate these risks.

All expressions of opinion are subject to change without notice in reaction to shifting market, economic or political conditions. Data contained herein from third party providers is obtained from what are considered reliable sources. However, its accuracy, completeness or reliability cannot be guaranteed.

Diversification and rebalancing of a portfolio cannot assure a profit or protect against a loss in any given market environment.   Rebalancing may cause investors to incur transaction costs and, when rebalancing a non-retirement account, taxable events may be created that may affect your tax liability.

Past performance is no guarantee of future results.  Forecasts contained herein are for illustrative purposes only, may be based upon proprietary research and are developed through analysis of historical public data.

The Chicago Board of Exchange (CBOE) Volatility Index (VIX) is an index which provides a general indication on the expected level of implied volatility in the US market over the next 30 days.

The S&P 500 Composite Index is a market capitalization-weighted index of 500 of the most widely-held U.S. companies in the industrial, transportation, utility, and financial sectors.

Composite Index of 10 leading Indicators is an index that is a composite average of ten leading indicators in the US complied by the Conference Board. It is designed to signal peaks and troughs in the business cycle, generally known as the leading economic index (LEI).  Components of the LEI include average weekly manufacturing hours, average weekly initial claims, new orders for consumer goods and non-defense capital goods, building permits and stock prices. Other components are indexes of supplier deliveries and consumer expectations, M2 money supply and the interest rate spread between 10-year Treasury bonds and federal funds.

The Citigroup Economic Surprise Index is an objective and quantitative measures, which show how economic data are progressing relative to the consensus forecasts of market economists.
MSCI AC World Index (ACWI)  is market capitalization weighted index designed to provide a broad measure of equity-market performance throughout the world. It  captures large and mid cap representation across 23 Developed Markets (DM) and 24 Emerging Markets (EM) countries. With 2,497 constituents, the index covers approximately 85% of the global investable equity opportunity set.

The Schwab Center for Financial Research is a division of Charles Schwab & Co., Inc.

All expressions of opinion are subject to change without notice in reaction to shifting market conditions. Data contained herein from third-party providers is obtained from what are considered reliable sources. However, its accuracy, completeness or reliability cannot be guaranteed.